More and more video footage of Moammar Gadhafi’s post-capture treatment continues to emerge, adding to speculation about the manner of his death as well as his treatment by the Misrata rebels that captured him. The speculation has even led to calls within the NTC for a more thorough probe. 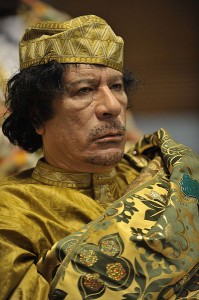 And Gadhafi’s corpse was out of the freezer today, at least briefly, as he was taken for an autopsy by a team of doctors at a hospital in the city. They declined to make public their findings, beyond the obvious fact that he was shot in the head, though they expected it would eventually be released by the NTC themselves.

What happened to the dictator is a matter of major concern both internationally and domestically, with Secretary of State Hillary Clinton backing a possible UN investigation into how Gadhafi was killed, saying it would be good for the new Libyan regime to “start with accountability.”

Domestically the concern centers not only around the propriety in killing Gadhafi without a trial, but in the continued use of his corpse as a tourist attraction in Misrata, something condemned by a number of more religious Muslims, who note that Islam calls for fairly rapid burials.

One thought on “Calls for Probe as Gadhafi Autopsy Completed”