Fresh off of CBS releasing a new poll showing overwhelming American opposition to continuing the war in Afghanistan US General John Allen, the new commander of the occupation, rejected the prospect of the war ending any time soon. 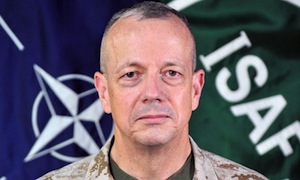 Indeed, in an interview with CBS’ 60 Minutes, Gen. Allen disavowed the 2014 Lisbon Conference date for ending the war, saying “we’re actually going to be here for a long time” and that the troop levels beyond 2014 were yet to be decided.

Allen, who replaced Gen. Petraeus as commander of the Afghan War and became the fourth commander since President Obama took office in 2009, did not offer the usual collection of “foolproof” strategy changes designed to turn the tides in the endless conflict.

“The plan is to win,” was all Allen would offer. This either speaks to a lack of confidence in the latest strategy shift, or perhaps more likely a lack of any strategy whatsoever as the war has a momentum of its own and, with the war planned to extend through 2024, the general likely realizes there will be a dozen or more commanders that will come after him and that what he does won’t matter all that much.