President Obama raised more than a few eyebrows with his declaration yesterday that 9/11 made the US “stronger,” but officials past and present seem to have all fallen in line with the general narrative of 9/11 as the start of a glorious new period of American history, defined exclusively by endless wars and runaway military spending. 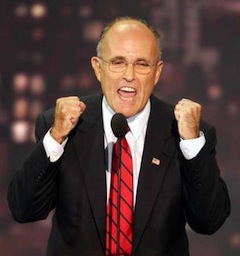 Admiral Michael Mullen, the outgoing Joint Chiefs of Staff chairman, cheered the past decade as “America’s military ventured forth as the long arm and clenched fist of an angry nation at war,” celebrating the “vengeance” visited upon assorted enemies over that period.

The “all’s well and ends well” sentiment was shared by former New York Mayor Rudy Giuliani, who declared that the terrorist attacks had changed America “mostly in good ways.”

For those hoping to look past the gushing, the various self-congratulatory interviews also afforded ample time to shill for more wars going forward, with former Defense Secretary Donald Rumsfeld insisting a terrorist attack was “imminent” if Congress dared to cut the record military budget, which dwarfs even the massive budgets Rumsfeld had to work with.

Rumsfeld’s old deputy Paul Wolfowitz, also keen to keep the warfare state up and running, declared that America would be at risk of being attacked if the US “withdraws too soon from Iraq.” No worries there, it seems, because despite President Obama’s repeated promises to the contrary the administration seems set to keep troops in Iraq for years to come.

7 thoughts on “For Officials, 9/11 Means Gushing About Wars and Demanding Continued Funding”