Libyan rebel officials citing French military sources say that a large number of pro-Gadhafi forces have fled the country into neighboring Niger, with estimates of between 200 and 250 army vehicles already in and around Agadez. 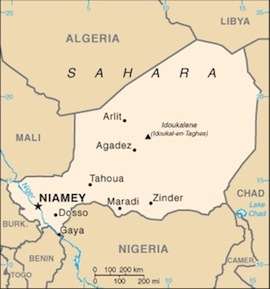 Exactly who is in the convoy of forces pouring out of Libya is unclear, but rebels said they could not rule out that Moammar Gadhafi, missing since the rebels sacked Tripoli, was among them.

The Niger government confirmed a crossing but denied that any military vehicles were involved, insisting the “small convoy” of people who entered were all unarmed and allowed in on humanitarian grounds.

The Gadhafi regime forged a number of close relations regionally and might well be welcomed as a “government in exile.” The nation of Burkina Faso rejected the notion that the troops were going to hide there, saying they had already recognized the rebels.

One thought on “Report: Gadhafi Forces Fleeing to Niger”