Hama Attorney General Adnan Bakkour’s story is a major one, but exactly which major one remains to be seen. Is he a top legal officer in the Assad regime that bravely resigned in the face of a massacre? Or did he get kidnapped and forced to read a statement at gunpoint? 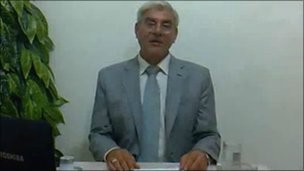 The first story is the story seen on in a pair of released videos, during which the apparent Bakkour insists that he resigned in anger when the regime ordered him to cover up the massacre of 300-plus protesters and issue a report blaming the protesters for the deaths.

The second story is the official story of the Syrian government. Already an additional Bakkour video denied that the regime’s claim was true, and the state media’s credibility after denying the massacres for weeks is probably about as bad as it can get.

At the same time, it is odd that Bakkour would pick this moment to resign. After all, the massacres happened weeks ago and he apparently didn’t have a problem with them then. Until he appears in public, a dangerous proposition no matter which story is true, it will remain a mystery.