In comments that further underscore the depth of the support the Mujahedin-e Khalq (MEK) has generated with its massive pay-for-speech campaign, retired Air Force Lt. Gen. Thomas McInerney praised the MEK and called for their delisting as part of a campaign of “provocative actions” against the Iranian government. 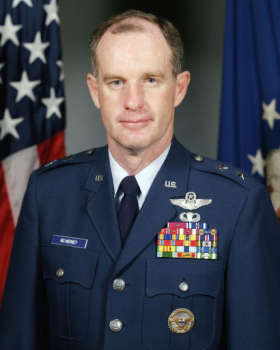 “We need a very active tit for tat policy, so every time they kill Americans they have an accident in Iran,” declared McInerney at the pro-MEK conference in Washington DC. It wasn’t too long before he made it clear that the MEK would be arranging these “accidents,” declaring the group a “credible overt political-military counterforce to the Iranian regime.”

Such comments would seemingly go against the MEK’s repeated claims to have transitioned from Islamo-Marxist cult into the non-violent champion of the free market it now styles itself as, but didn’t seem to phase anyone, including the conference’s organizer Ray Tanter, who insisted the attacks the MEK has conducted inside Iran were simply “military activities” and didn’t count as terrorism.

The MEK was a founding member of the State Department’s list of Foreign Terrorist Organizations, and conducted numerous attacks against US targets before the Iranian revolution, transitioning into a key Saddam Hussein ally afterwards and eventually into a darling of US hawks who are keen to use them as a proxy force to attack Iran.

21 thoughts on “Retired US General: Delist Terrorists as ‘Provocative’ Action Against Iran”