In comments which notably did not include a demand for Syrian ruler Bashar Assad to leave power, Secretary of State Hillary Clinton today insisted that every nation on the planet should stop buying oil and gas from the country and “get on the right side of history.” 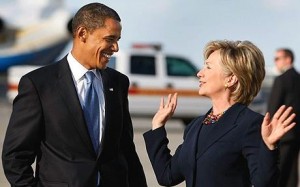 The US, along with the European Union, have enacted significant sanctions against the country to protest Bashar Assad’s crackdown on pro-democracy protesters nationwide. The sanctions have included moves against the nation’s banks and cell phone providers.

It is unclear, of course, how the demand to further isolate the nation economically will actually further the “reforms” that the Obama Administration still seems to believe are forthcoming under the regime (if only the demand is repeated often enough).

Indeed, it seems that Syria’s isolation is going to make it even less open to listening to Western suggestions that they offer some modicum of reform or at least stop massacring demonstrators, as the country will be forced to rely more and more on foreign handouts from the Iranian government as its floundering economy, one of the chief complaints of protesters, continues to get worse.