Rep. Peter King (R – NY) has called today for a third round of “hearings” probing whether American Muslims are becoming “radicalized.” The new hearings will center on Somali-Americans, and the Somali militant faction al-Shabaab. 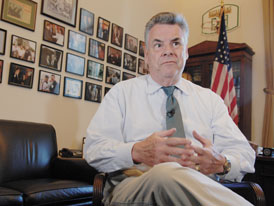 Conveniently coming just a day after US officials started presenting new claims that al-Shabaab is secretly in league with al-Qaeda, the hearings will probe if Somali-Americans are being recruited by the group and are a “growing threat to our homeland security.”

Rep. King has been pushing the hearings all year, claiming that America’s Muslim minority poses a threat to the country. The move has sparked serious concern that it will fuel yet more discrimination against Muslims.