Russia’s Foreign Ministry has expressed serious concerns with the US deployment of a guided-missile cruiser warship, the USS Monterey, to the Black Sea just off the Russian coast. The ship is in the sea as part of a Ukraine-hosted NATO exercise. 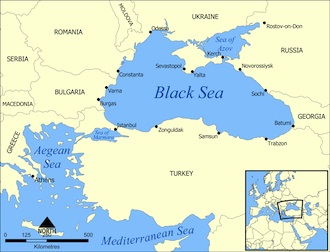 But Russian officials termed the presence the Monterey, which is part of the NATO missile shield opposed by Russia, as a serious “aggravation” and asked what the point was of the US deploying such a ship as part of an exercise nominally about maritime security.

Russian officials have long maintained that the missile shield is directly aimed at them. NATO insists it is aimed at Iran, despite most of the shield falling well outside of the range of any theoretical Iranian missile attack. The case has been made stronger by the efforts to deploy such forces extremely close to Russia, particularly the efforts to put the forces in far eastern Poland along the Russian frontier.

The Monterey’s deployment along the Russian front also comes at a time when NATO-Russian talks about the shield have reached an impasse, further fueling the Russian belief that the use of that particular ship is a deliberate slight.