Senator Rand Paul (R-  KY) stunned everyone yesterday when he announced that he intended to filibuster the planned four year extension of the Patriot Act if the Congress did not agree to debate possible amendments. 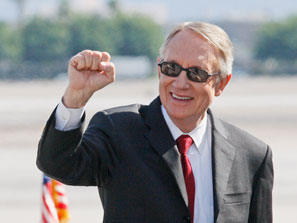 The suggestion that the extension should be debated fueled considerable opposition, particularly from Sen. Dianne Feinstein (D – CA), who insisted it would be a “huge mistake” to debate the bill and might threaten national security.

Fortunately for Sen. Feinstein, the Senate Majority Leader Harry Reid (D – NV) sprang into action, and found a way to prevent any such debate from taking place. Instead of passing the Patriot Act the Senate has now slipped the entire extension into a “small business bill” which cannot be filibustered.

The Patriot Act provisions are scheduled to expire at the end of the week, but are expected to be rubber stamped by Congress, barring any unforseen inconveniences, like a public debate of the controversial provisions.