Speaking one day after Israeli troops killed at least 20 civilian protesters in cross border attacks, White House spokesman Jay Carney praised Israel for its “restraint” and said that the Netanyahu government had every right to kill those people “to prevent unauthorized crossing at its borders.” 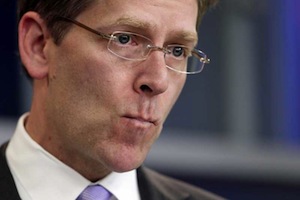 The protesters were commemorating the “Nakba” or “catastrophe,” which refers to the mass expulsion of Palestinians from their homes at the founding of the Israeli state. The commemoration is explicitly banned within Israel since 2009.

Late Sunday night Israeli media reports emerged showing that the Foreign Ministry had dispatched an official memorandum on the killings, which ordered Israeli diplomats to blame Syria for all the deaths, including apparently the 10 people killed inside Lebanon by Israeli troops.

That message appears to have reached the White House as well, as Carney was quick to blame the Assad government for “inciting” the protests, and said that “such behavior is unacceptable.” Though Syria has nominal control over their side of the border, in the face of massive nationwide protests it is unclear how able the Assad regime would even theoretically be in drumming up rallies among the nation’s Palestinian refugees.