The death toll from Friday’s “Good Friday Massacre” in Syria has risen to at least 112 according to media reports this morning. The violence isn’t over, either, as security forces fired live ammunition on mourners early Saturday, killing 14 more and bringing the toll to at least 126. 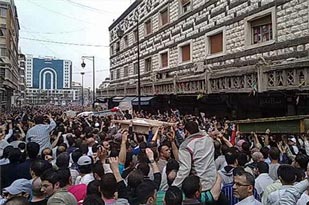 This death toll is in addition to hundreds of wounded protesters, many of them seriously wounded by live fire during the Friday rallies. The death toll, then, is likely not finalized, as more could die of their injuries going forward.

This was the fifth straight week of Friday protests in Syria, and each week the numbers have grown enormously. The tiny protests in the southern city of Daraa have given way to a nation-wide movement, and the violent crackdowns seem only to swell the size of the demonstrations.

The sheer number of deaths also sparked a backlash from some members of parliament, as two MPs from the Daraa region announced their resignation on Saturday. Nasser Hariri, one of the former MPs, announced that “if I cannot protect the chests of my people from these treacherous strikes, then there is no meaning for me to stay in the People’s Assembly.”