Protests are continuing apace across Yemen, but President Ali Abdullah Saleh’s previous offer to transfer power to a supporter has been rejected this weekend by the ruling party, which now insists that Saleh is the only person who can rule through the elections scheduled for 2013. 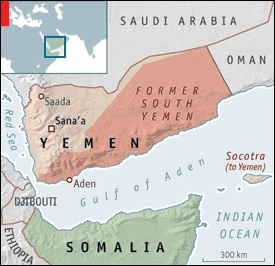 But the regime’s control is wavering in the face of overwhelming opposition, meaning the refusal to step down is increasingly an academic matter rather than a practical one. Military defectors have made a violent crackdown in the capital all but impossible, and elsewhere, things are also turning against the US-backed government.

This is doubly true with the active secessionist movements in the far north (the Shi’ite Houthis) and the territory of former South Yemen, where the regime has lost control over at least four provinces. The separatists have even appointed a provincial governor in Sadaa.

Al-Qaeda in the Arabian Peninsula (AQAP) has also been confirmed to be attacking across several central and southern provinces. President Saleh has accused AQAP of being behind takeovers in the southern province of Abyan, but it is unclear if the takeovers are truly AQAP or the longstanding Southern Movement secessionists. The Saleh government has often blurred the lines between the two to provide an excuse to attack secessionist rallies.