Update 3/6 12:57 PM: Foreign Secretary William Hague is reporting that the SAS troops as well as the diplomat “have now left Libya.” He insisted that the British government would send more diplomatic teams to East Libya “in due course.”

Sometimes no really means no.

That’s what the British military learned today when, after a solid week of Libyan rebel leaders insisting that they didn’t want any foreign intervention in the ongoing efforts to oust long-time dictator Moammar Gadhafi, they decided a great idea would be to dispatch a unit of their special forces, the SAS, to Benghazi to “offer help.” 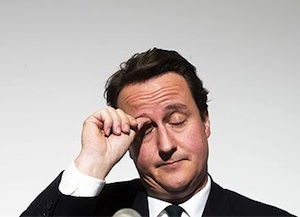 The troops arrived in plain clothes and accompanied a “junior diplomat” who had ostensibly been dispatched to “establish relations” with the opposition’s leadership council. The rebels have been in control of virtually the entire eastern half of the nation plus a number of cities in the west for over a week.

But the rebels’ troops spotted the plain clothes troops and hauled them away, worrying that public support would be damaged if they were seen as a Western-backed coup against Gadhafi, one of the chief reasons they have repeatedly spurned US and British offers of military help.

Though the diplomat’s arrival doesn’t appear to have been a major problem, the protest movement has sought international recognition as the “legitimate government of Libya” over the Gadhafi regime, the fact that he showed up uninvited with a unit of soldiers appears to have angered the rebel leadership council, which immediately ordered the lot of them thrown into a military brig.

Publicly the British Defense Ministry has declined comment on the arrests, saying that they never comment on any activities of the SAS, but officials have said off the record that they don’t expect the matter to escalate and that the rebels are “just making a point.” Indeed, reports from the following morning suggested that the troops and the diplomat were expelled from the country, though Foreign Secretary William Hague suggested they would likely send another “team.”

The point, which appears to have been lost on Western officials the first hundred times they said it, is that Libya’s protest movement does not want a NATO-led occupation, or any other occupation, and that they feel perfectly capable of taking the rest of the nation on their own, using a combination of the military defectors (which amount to most of Libya’s military) and the massive popular support for Gadhafi’s ouster.