Speaking today on Libya’s State television, Saif al-Islam al-Gadhafi, the son of Libyan dictator Moammar Gadhafi admitted to the ‘mistakes” of the army, but accused foreign media of exaggerating the massive death toll (claiming only 84 dead) and blaming protesters on drugs of trying to split the nation. 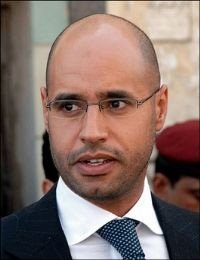 At the same time, the younger Gadhafi appeared to concede that the eastern half of the nation was lost, and offered some decentralization if they returned it to the regime. He also warned the protesters that if they continued they’d need passports to visit the western part of the country, which is still mostly under regime control.

But Gadhafi, who was confirmed to have talked to British Foreign Secretary William Hague right before his address, also said that the US and Britain would never allow a free Libya and that if the nominally pro-West Gadhafi regime fell they could count on an imminent US invasion and Iraq-style occupation.

The Britisah Foreign Office confirmed talks with Gadhafi, and said Hague urged the regime to start “dialogue and reforms,” which seems like a bad joke after hundreds have been killed. The protests appear to have continued after the threats, and protesters continued to reiterate their call for the Gadhafis to leave power.

18 thoughts on “Gadhafi’s Son Warns Protesters of US Occupation”