Senators are split three ways on how to procede with the forthcoming extension of the most controversial portions of the Patriot Act, with questions over adding some nominal oversight to the process and length of the extension causing serious rifts. 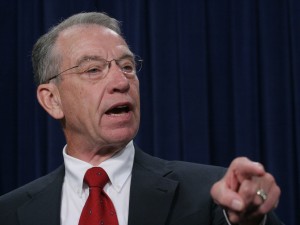 Senate Judiciary Chair Patrick Leahy (D – VT) has the most modest extension of the three, seeking to extend the provisions through 2013 and promising some oversight over how the US surveils its citizenry.

This bill was quickly slammed by Sen. Chuck Grassley (R – IA) who introduced an alternative bill that would extend the provisions for all of eternity and would prohibit any additional oversight of the spying activity. Sen. McConnell (R – KY) backed Grassley’s version, insisting that the “threat of oversight” would burden the never-ending war on terror. Sen. Dianne Feinstein (D – CA) sought a compromise bill, which would use Leahy’s 2013 date but Grassley’s total lack of oversight.

The fighting is all quite interesting (and ominous) but will likely be meaningless as the House version of the bill is seeking to avoid the sort of major political battle of the others and will simply extend the provisions, oversight-free of course, for 10 more months.