A growing number of Muslim groups are expressing serious reservations about the plan of House Homeland Security Committee’s chairman, Rep. Peter King (R – NY) to hold hearings at which hae has promised to expose the “real threat” posed by America’s Muslim minority. 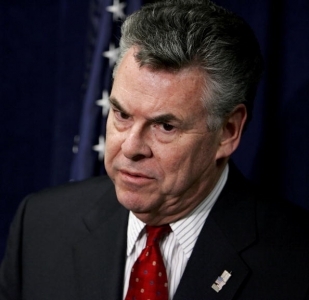 King, who previously opined that America has “too many mosques” and that the government needed to focus more on how to infiltrate them, insists that the hearings will prove that the Muslim community isn’t sufficiently pro-war nor eager enough to cooperate with law enforcement probes against them.

Despite some half-hearted assurances that the probe would be “fair” the effort is seen by many as an attempt to portray the broader Muslim community as a grave threat to the US government, with stop-offs related to the Ground Zero Mosque controversy for good measures.

Though King denied planning to paint the entire Muslim community with the probe it has also raised questions about the notion of having a Congressional inquiry into the American-ness of an entire religious minority in the first place. Though Rep. King appears quite comfortable with the move, it remains to be seen what impact it will have on the treatment of Muslims across the nation.

7 thoughts on “Muslim Groups Concerned Over Congressional Probe of Muslims”