The release of large amounts of classified documents has shown how eager the administration is to tell the American public the exact opposite of what they are telling one another. It seems that the classification system isn’t even necessary for this, however, as Vice President Biden, fresh off of pledging to the American people that the US would be totally out of Afghanistan “come hell or high water, by 2014” has now told a completely different story to Afghan officials. 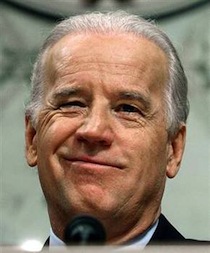 “We are not leaving in 2014,” Biden assured President Hamid Karzai during a news conference in Kabul, insisting that the US was prepared to continue with its military occupation “well beyond 2014.”

Biden, who had previously chastised Karzai for his corruption, praised him today for his “leadership” through nearly a decade of failed NATO military adventures. Karzai, who has recently been condemning the US for killing large numbers of civilians, spent his time praising the US for its “contributions.”

Currently there are some 150,000 NATO troops, predominantly from the United States, and NATO estimates that there are 25,000 Taliban forces in the country, which is the exact same estimate they made a year ago. Despite claims of “progress” in the war, violence is still on the rise across the nation.