Speaking today on NBC’s “Meet the Press,” Senator Lindsay Graham (R – SC) called for the United States to establish permanent military bases in Afghanistan so they could retain control over the nation permanently beyond the still ongoing occupation. 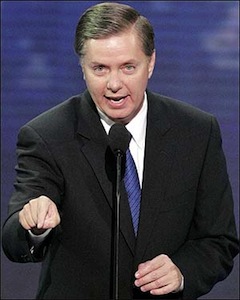 Sen. Graham maintained that the permanent military presence would “be enormously beneficial to the region” and was vital to ensure that the Karzai government would have “an edge against the Taliban in perpetuity.”

Graham’s comments again point to the view that, even beyond the theoretical end to the seemingly endless NATO occupation of Afghanistan, there’s going to be a major war going on that requires a permanent US military presence.

But the Senator’s demands to secure this scheme in 2011 may be hasty even for the ultra-hawkish crowd he generally panders to. With the war worsening through multiple escalations in 2009 and 2010, the war, which will be entering its second decade later this year, is far from won, and the decision of how best to secure eternal hegemony over Central Asia seems to ignore the fact that 150,000 NATO troops don’t seem capable of bringing the war to anything resembling an ending.

19 thoughts on “Sen. Graham Calls for ‘Permanent’ US Bases in Afghanistan”