In an op-ed today in the New York Times, former Soviet premier Mikhail Gorbachev urged the US Senate to follow up on its ratification of the new Strategic Arms Reduction Treaty (START) with a quick move to ratify the Comprehensive Nuclear Test Ban Treaty. 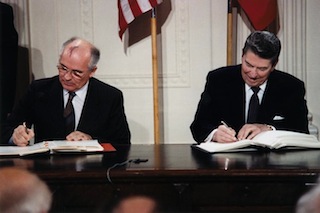 Gorbachev insisted that a formal test ban treaty was still vital to the effort of global disarmament and noted that the process of securing ratifications from the last few holdouts could only restart if the US took the lead. 35 of the 44 nations needed have already ratified the treaty, but the efforts stalled in 1999 when the Senate voted it down.

And while President Obama has insisted since 2009 that getting the ratification is a top priority, actually doing so is going to be an uphill battle, particularly after an ugly battle and a lame-duck ratification of New START.

Sen. Jon Kyl (R – AZ) is expected to lead the fight against the treaty again, as he did in 1999. He continues to insist that the treaty is a grave threat to US military dominance over the planet, despite the US not having conducted an underground nuclear weapons test in nearly two decades.