A 2006 State Department cable leaked as part of WikiLeaks’ cablegate collection shows Bush Administration officials plotted to use false claims about Venezuela’s alleged nuclear ambitions to damage the country’s reputation around the world. 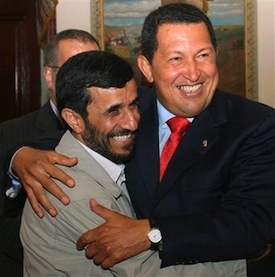 Incredibly, the document leads off in the very first paragraph by conceding that all the allegations against Venezuela in this regard “appear baseless,” and they later shrug off the allegations as “little more than conspiracy-mongering by Chavez adversaries.

But apparently there was no point in letting the truth get in the way of a convenient lie, and the document openly talks about how the Caracas embassy will seek to “exploit Venezuela’s missteps” and use the allegations to drum up opposition amongst countries like France which, it lamented, “have tended to make light of our concerns about Venezuela’s antidemocratic tendancies and militarization.”

In the end the document warns against dismissing the rumors publicly and expressed hope that Venezuela’s “coziness” with Iran would give them more opportunities to make diplomatic gaffes which the US could exploit to their own ends.

2 thoughts on “Cable: US Plotted to ‘Exploit’ Venezuela Ties to Iran”