A new revelation from the WikiLeaks Cablegate releases comes from 2007, as Spain’s government was preparing to fight for reelection. The Bush-era State Department reacted with outrage that Spanish Prime Minister Zapatero’s Socialist Party was criticizing the former government’s involvement in the Iraq War, and concern that they were associating with “pacifists.” 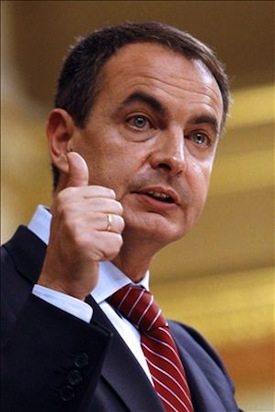 Zapatero’s first term in office was won largely on opposition to the Iraq War, and he withdrew all the Spanish troops from Iraq shortly thereafter. Faced with criticism over his handling of the internal ETA conflict, the prime minister re-raised the issue of the Iraq War, condemning the invasion as “illegal.”

This was of serious concern to the Bush Administration which warned him that they were “running out of patience” with his public criticisms of the war, even though this is nearly three years after Spain had ended its participation in it. Then-ambassador Eduardo Aguirre is said to have accused Zapatero of being unfair in bringing the US and Britain into his criticism of the invasion of Iraq, saying Zapatero should focus exclusively on internal political rivals.

The cable ends with a warning to Zapatero to “tone down” his criticism of US foreign policy, and a note that Deputy Envoy Hugo Llorens (now ambassador to Honduras) intended to warn other top members of Spain’s ruling party not to publicly criticize the US invasion of Iraq in their campaigns.

11 thoughts on “State Dept Warned Spain: US ‘Running Out of Patience’ With Antiwar Positions”