Allegations that Britain’s Brown government was conspiring to foil the Chilcot Inquiry into the British invasion of Iraq were confirmed today when a WikiLeaks cable from 2009 showed that Defense Ministry official Jon Day promised the United States that the Brown government had “put measures in place to protect your interests” during the inquiry. 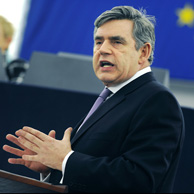 Officials within the Chilcot Inquiry insisted that they are independent of the government, but conceded that the inquiry allowed for material to be withheld if it “would damage international relations.”

Brown had previously shrugged off allegations of attempts to foil the inquiry, insisting that Sir John Chilcot had full freedom to do whatever he wanted in the context of the inquiry. During the election David Cameron (the current prime minister) slammed the Brown government for turning the inquiry into “an establishment stitch-up.”

The inquiry was meant to examine the decision-making process that led to the Blair government joining America’s invasion of Iraq. Since the inquiry would almost certainly have to center around Blair and President Bush conspiring to lie the public into war, this was a serious concern for US officials.