Among the first major revelations of the massive release of WikiLeaks diplomatic cables comes from Saudi Arabia. Saudi King Abdullah has been repeatedly pressing the United States government to launch a unilateral attack on his long-standing rival, Iran. 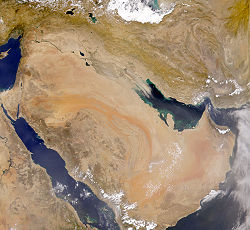 The calls to attack are nominally presented as about Iran’s civilian nuclear program but seem to center around the king’s belief that Iran is uniquely “evil” and needs to be stopped to save the region. Given that the Saudi King and the Iranian Supreme Leader are extremely influential in two rival sects of Islam, the effort seems more aimed around getting the US involved in a Holy War of sorts than stopping Iran’s modest civilian enrichment program.

That Saudi Arabia is putting forth so much effort to start a major regional war along sectarian lines would be troubling in and of itself, but doubly so as the Obama Administration has just completed agreeing on the largest arms sale in US history to Saudi Arabia.

The $60 billion arms sale was couched as important for regional stability. Yet this is the exact same Saudi government that is pressing for the Obama Administration to start a major, region-wide war which would destroy any such stability. It seems then that the arms sale is more about enabling Saudi Arabia to potentially start this major war themselves.

8 thoughts on “Saudi King Pressing for US War Against Iran”