Flush with optimism after major victories in yesterday’s Congressional elections, House Republicans have promised one of their first orders of business is to attack President Obama’s July 2011 drawdown date in Afghanistan, despite the comparative handicap that the president already disavowed that date months ago. 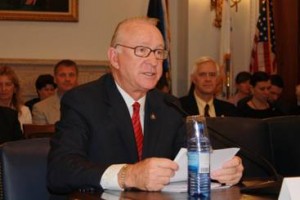 Rep. Buck McKeon (R – CA), seen as a virtual lock to head the House Armed Services Committee, says that the committee’s top priority will be to continue the war in Afghanistan. McKeon pledged to work directly with commander Gen. David Petraeus to commit more equipment and resources to the war effort.

Upon taking office in 2009, President Obama quickly established Afghanistan as his war, dramatically and repeatedly escalating the US presence despite ever worsening conditions. It seems now that he will face challenges from Republicans looking to make it their war instead, and the race may be on to out-hawk one another on the war, despite poll data showing the war is increasingly unpopular among voters.

An aide for Congressional Republicans also suggested that the party will be keeping a close eye on President Bush’s commitment to have troops out of Iraq by the end of 2011, a pledge which President Obama eventually endorsed (after abandoning campaign pledges to end the war at an earlier date). This has become a growing issue as the State Department, which is scrambling to assemble its own army to continue the war for years after 2011, has faced warnings it may not be up to the task.