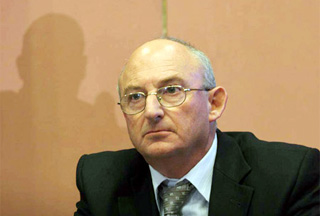 Today, in an interview with Israel Radio, Eldad urged Israeli soldiers along the border to do everything in their power to shoot and kill Iranian President Mahmoud Ahmadinejad on the occasion of his diplomatic visit to neighboring Lebanon.

“To assassinate Ahmadinejad today is like assassinating Hitler in 1939,” he insisted, adding that “he must not return home alive.” Ahmadinejad is planning to visit a Shi’ite mosque not far from the border in Southern Lebanon, a replica of the al-Aqsa Mosque in occupied East Jerusalem, and might well be in range of Israeli snipers during the visit.

But such an assassination would be no small diplomatic incident, even for a nation that spends as much time assassinating people as Israel does. The killing of an Iranian President, even a comparatively unpopular one, would undoubtedly turn him into a hero in much of the Middle East, and would likely cement the position of hardliners within Iran itself. This is before mentioning the diplomatic fallout or the retaliatory strikes against Israel, which would probably be significant.

38 thoughts on “Israeli MP: Ahmadinejad Must Not Leave Lebanon Alive”