Ecuador appears to be on the verge of a new coup d’etat tonight as police and military forces have launched a rebellion over attempts to cut their bonuses. Ecuador’s President Rafael Correa, who was attacked earlier today by police, has accused the opposition of plotting against him. 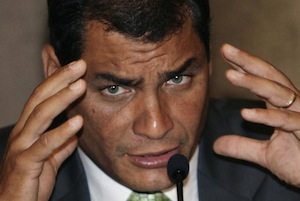 The country is currently in a state of emergency, which in Ecuador means broad swathes of power have passed temporarily to the military. Exactly how temporary this is remains to be seen, however, as President Correa’s close ally, Venezuelan President Hugo Chavez, accused them of “trying to oust” the government on Twitter.

The US also chimed in on the growing unrest, promising “full support” for President Correa and insisting that they are “closely monitoring events.” US ties with Ecuador’s government had been strained since they were evicted from an air base in the nation.

Ecuador has a history of coups d’etat, spending most of the 1970s under a military junta, and also a history of the ouster of presidents through mass protests. Since coming to power in 2007, Correa has been comparatively popular, easily winning reelection in 2009 and seeing his political bloc with a significant plurality in the most recent parliamentary elections. He has however accused the media of plotting against his “socialist revolution.”