With the US military looking to use its new Cyber Command as a justification to engage in endless hostile action across the Internet, former CIA Director Michael Hayden believes that President Obama ought to be given broad new powers to shut the entire thing down. 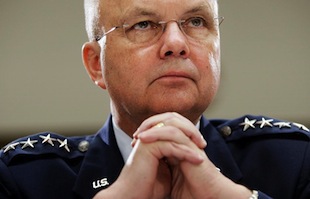 “It is probably wise to legislate some authority to the President, to take emergency measures for limited periods of time, with clear reporting to Congress, when he feels as if he has to,” Hayden insisted.

Hayden expressed wonderment at the new possibilities of Internet warfare, likening it to a “frontier experience,” and saying it amount “to a new age of exploration” for the military. The idea to give President Obama full dictatorial power over the Internet “when he feels as if he has to” is nothing new, however.

Rather in June Senator Joe Lieberman (I – CT) introduced a bill in the Senate aiming to claim the entire Internet, across the entire planet, as a “national asset” of the United States and seeking to give President Obama the authority to shut it down on his own “for national security reasons.” The bill also sought to give President Obama the right to seize direct control over large portions of the Internet whenever he declares there to be a “cyber emergency.” The bill remains in Committee, but was eagerly endorsed by Microsoft and a number of other corporations.

One thought on “Former CIA Chief: Obama Must Be Given Power to Shut Down Internet”