According to Justice Department Inspector General Glenn Fine the FBI lied to Congress and the American public about the need for a domestic spying operation against a 2002 antiwar rally in Pittsburgh, Pennsylvania. Fine insists there was no reason to expect any terror links to the rally. 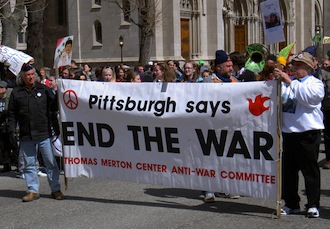 The why however is perhaps even more incredible, as Fine attributed to FBI probe and the subsequent cover-up to “an ill-conceived project on a slow work day.” So apparently the FBI was just bored at the time.

The FBI’s actions in this case and several others were under investigation after the agency claimed a “counter-terror” justification for investigating the openly pacfist Thomas Merton Center for Peace and Justice, primarily because the group was handing out leaflets opposing the (then upcoming) US invasion of Iraq.

The FBI’s report into the probe said that agents photographed members of the group handing out the leaflets, and expressed concern that one of the people “appeared to be of Middle Eastern descent.” The investigation was just one of many the FBI opened against opposition groups during the Bush administration.
﻿