Israeli government officials confirmed today that they will go ahead with plans to “buy” a number of F-35 stealth fighter jets from US military contractor Lockheed Martin. Reports suggest the deal will be worth $2.75 billion, making it one of the largest single arms purchases ever. 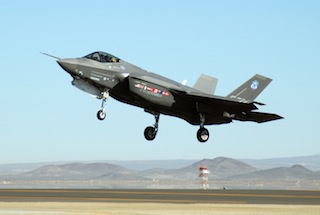 The high cost of the F-35s made the deal controversial among Israeli defense officials, which is perhaps surprising inasmuch as the Israeli government won’t actually be paying a dime for the warplanes.

Rather the entire cost will be covered by the US government in the form of military aid, meaning the US will be pasying Lockheed directly and delivering the warplnes to Israel for free.

The F-35’s enormous costs have made it hugely controversial in the US as well, though the question of giving Israel a number of the planes does not appear to have been questioned at all. The planes are expected to be delivered in 2015, assuming development goes according to plans.