Speaking today at the International Institute for Counter-Terrorism conference, former Mossad chief Danny Yatom urged the international community to come together and form a joint air force led by the United States to launch massive air strikes across Iran. 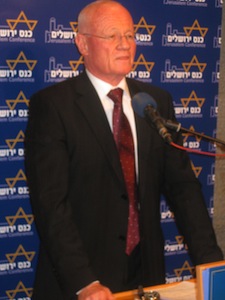 “Sanctions are not enough, I am hopeful that the world will come to its senses,” Yatom noted. Coming to its senses, it seems, is a euphemism for starting a massive war that is bound to spread across virtually the entire Middle East.

Yatom served as head of Mossad from 1996 to 1998, and also served as a member of Israeli parliament under the Labor Party. He resigned from politics in 2008 citing his lack of confidence in the Olmert government.

Yaton made comments a year ago (nearly to the day) in an interview with Russia Today, in which he doubted that a peaceful resolution was possible with Iran. He declared at the time that it was “prohibited” for the world to allow Iran to continue its civilian uranium enrichment but said there was still time for diplomacy. Now, he seems to have jumped on the bandwagon for a military strike, and seems not to even mention the possibility of further diplomacy.