Officials from the US Treasury Department are insisting tonight that absolutely no US taxpayer dollars will be put forward to bail out the increasingly unstable Kabul Bank, which has been struggling with a growing bank run over the past week. 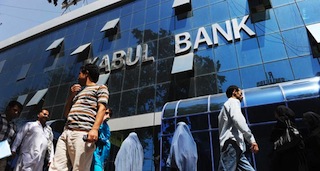 “While we are providing technical assistance to the Afghan government, no American taxpayer funds will be used to support Kabul Bank,” insisted Deputy Treasury Secretary Neal Wolin. The Treasury Department dispatched a team to Kabul last week when the crisis first emerged.

A number of media rpeorts have emerged over the past several days alleging that certain highly placed leaders in the bank, including Afghan President Hamid Karzai’s brother Mahmoud, have been taking out questionable loans. Mahmoud Karzai is even alleged to have paid for his 7% stake in Kabul Bank with funds borrowed from Kabul Bank.

But the bank’s importance in the Afghan economy cannot be understated. Many contractors are paid through it, many key government figures have accounts there, and many Afghan military and police cash their checks at the bank. Its failure could be a disaster, and its failure due to corruption would probably damage what little credibility the Karzai government has left.

To that end there are reports emerging that the Afghan Central Bank is recalling hundreds of millions of dollars from the US and that President Karzai has ordered $380 million set aside to prop up the struggling bank. Though this is a comparatively small amount in the world of international finance, it would represent a major expense for the cash-poor Afghan government, and might leave the nation’s finances in even greater doubt than they already are.

2 thoughts on “Treasury Dept: No US Bailout for Kabul Bank”