Back in the public eye with the release of his memoirs, former British Prime Minister Tony Blair might lead one to believe it is 2003 all over again. Praising George W. Bush as a great leader and one of the most decisive men he had ever met, Blair also lauds the Iraq War. 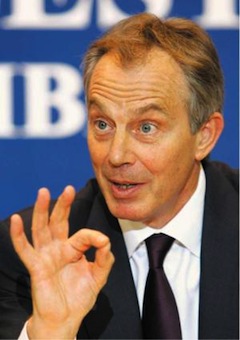 And if the Iraq War has somewhat faded in Americans’ memories with the myriad false declarations of victory in recent weeks, it is a much more bitter taste in Britain, where public hearings continue into how the nation was brought into such a disastrous conflict. Blair however chides antiwar people to “keep an open mind” and insists that the war was a great success.

So great a success in fact that he seems eager to replicate it with a similar war against Iran on similarly false pretenses. How similar? Blair actually cites 9/11 and accuses Iran of “developing nuclear weapons” before concluding that there is “no alternative” to a military attack on them.

The invasion of the much small Iraq came on the basis of false links to 9/11 and false claims of the Iraqi government developing nuclear weapons. In addition to thousands of troops which died in the 7+ years of military occupation, an unknown and perhaps unknowable number of Iraqis were also slain. The number varies, from conservatively a few hundred thousand to well over a million.