Speaking today in Detroit, Joint Chiefs of Staff Chairman Admiral Michael Mullen took on the rare task of declaring what he believed was the “top” threat to America’s national security going forward. It wasn’t Iran, it wasn’t North Korea, it wasn’t even some ill-defined group of factions called “terrorism.” It was the national debt. 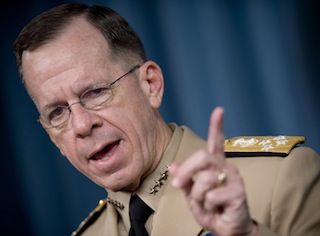 “The most significant threat to our national security is the debt,” Mullen insisted, adding that it is “so important that the economy move in the right direction” to pay for more military spending going forward.

“The resources that our military uses are directly related to the health of our economy,” Mullen warned. When lamenting that the US taxpayers will pay $600 billion in interest on the debt in 2012, Mullen noted “that’s one year worth of defense budget.”

Mullen’s visit was primarily aimed at pressing arms manufacturers to hire more veterans, adding that it was “patriotic” to integrate soldiers into the local work force and insisting that industry and military leaders share the same goals. He added that military funds to buy more weapons to arm more soldiers would be leveraged “as much as possible” to companies to hire veterans.