Speaking to a crowd of high school and college students at the University of Denver, Supreme Court Justice Sonia Sotomayor declined to answer a question about free speech and how it can be reconciled with government secrecy, citing the WikiLeaks leak of documents related to the Afghan War. 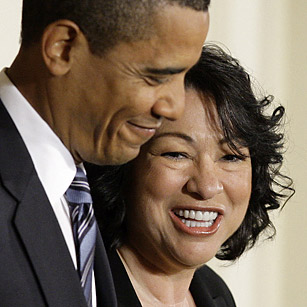 “That question is very likely to come before me,” Sotomayor insisted, adding that legislation is “already being discussed in Congress and so some of it is going to come up before the court.”

But Sotomayor did say that free speech is “a constant struggle in this society, between our security needs and our First Amendment rights, and one that has existed throughout our history.”

The Obama Administration has condemned the release of the classified war documents as a grave threat to national security, despite downplaying their content. Pentagon officials have demanded that WikiLeaks unrelease the documents and has threatened to take unspecified action against them.

Though the Supreme Court already ruled on this issue in 1971, officials have hoped to find a loophole by claiming that WikiLeaks isn’t a “media outlet” and that it therefore does not have freedom of the press. At the same time the group isn’t based in the US so the ability of the US to act against them seems very much in doubt.