It was business as usual in Iraq today for 56,000 US troops, despite the canned “victory” celebration yesterday the troops, though by and large redefined as something, anything, other than “combat troops” were still out and about, doing the exact same things they were doing when they were still engaging in combat. 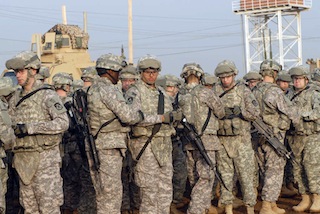 Its just that its called “counter-terrorism operations” instead of combat now. The “last brigade” may have left yesterday, but six more brigades are still there, wondering when or even if it will be their turn to be the “last” to leave.

And while the celebration must have been thrilling for that “last” brigade, it must be somewhat bittersweet for the troops still there, who as far as the media are concerned are an afterthought, probably doing training or some such.

In fact even if we were to ignore the 50,000 renamed troops the claim of an end to combat operations yesterday wasn’t true, as some 6,000 troops which are still designated as combat troops still haven’t left, though they are scheduled to do so at some point in the future.

Still these 6,000 combat troops leave one wondering why yesterday of all days was selected as the official “end of the war” day, and makes the date seem even more arbitrary than it already was.

6 thoughts on “Don’t Call It Combat: US Troops Still Fighting Iraq War in Everything But Name”