Some 18 months after President Barack Obama announced to all Americans that the detention center at Guantanamo Bay would be closed within a year, it remains as open and active as ever, with large numbers of detainees still being held without charges and only one possible civilian trial already set up going forward. 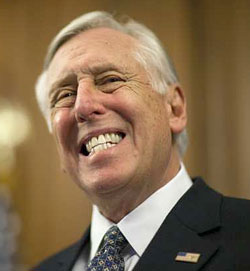 The president put forward a half-hearted proposal to Congress to close it in 2009, which was promptly rejected, to presidential praise. Since then the proposal has basically died on the vine, and Congress has done nothing about it.

And that will not change any time soon, according to House Majority Leader Steny Hoyer, who today declared that the topic is not “a priority” for Congress, and that it is not “of real current discussion” and will not be so going forward.

In December officials admitted that the closure would not come until late 2011 “at the earliest.” With several more months going by with nothing happening, it seems that date must have moved even further back. This could mean that after making a promise to close Gitmo central to his 2008 campaign, President Obama will be able to make another promise to close Gitmo in 2012.

One thought on “House Majority Leader: Gitmo Closure ‘Not a Priority’”