June’s devastating record death toll in Afghanistan, 103 NATO troops including 61 Americans, may just be the tip of the iceberg, according to second in command Lt. Gen. David Rodriguez. 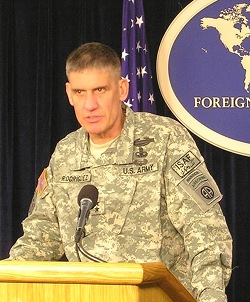 “We are going into places that have been significant support bases for the Taliban for the past several years,” Rodriguez explained, “and they’re going to fight hard for those, and that’s why we expect the casualties to go up.”

The death tolls have been on the rise all year, with every month in 2010 the worst on record since the war began. Yet June’s reaching of the 100 plateau took everyone by surprise, more than doubling the previous record for that month and handily surpassing the worst month overall, August 2009, which saw 77 NATO troops killed.

But Lt. Gen. Rodriguez’ comments suggest the toll is the new normal, and furthermore he cautions against drawing any conclusions about how badly the war is going based on the massive death tolls. “This is a contest of wills,” he insisted, adding that there was an “upward trajectory in the war.

These claims of progress have been made for years by US leadership about the war, but if the rising death toll is not the metric for progress, or the dismissal of the “drawdown date,” or the record number of Taliban attacks, what possibly could be?

One thought on “General: US Casualties in Afghanistan Will Continue to Rise”