The Pentagon has announced its selection of a replacement for General David Petraeus as Central Command (CENTCOM) Commander today, and it will be the controversial Gen. James Mattis that goes to Congress for final approval. 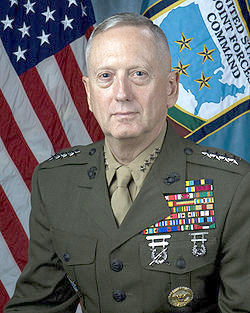 Gen. Mattis, who was previously serving as Joint Forces Command chief, had been out of the headlines for a few years, but his colorful past and what Gen. Michael Hagee called his tendency to “speak with a great deal of candor” ensure that the approval process will be anything but boring.

In 2005, then Lt. Gen. Mattis spoke of his “fun” experience in Afghanistan at a forum in San Diego, describing it as “a hell of a hoot.” After laughter from soldiers in the audience Mattis went on to declare “it’s fun to shoot some people.”

Mattis continued to elaborate. “You go into Afghanistan, you got guys who slap women around for five years because they didn’t wear a veil,” adding “guys like that ain’t got no manhood left anyways. So its a hell of a lot of fun to shoot them.”

Officials attempted to explain away Mattis’ declaration at the time, and praising him as a great military leader. Gen. Peter Pace said of Mattis that “his actions and those of his troops clearly show that he understands the value of proper leadership and the value of human life.” Mattis’ most recent deployment at the time was to Iraq, where he took part in both battles of Fallujah, which left large numbers of Iraqi civilians dead.

Though Mattis’ comments garnered quite a bit of controversy at the time, just two and a half years later the Bush Administration promoted him to a four star general and gave him his current command. Though strictly speaking the transition from Joint Forces Command to Central Command is not a promotion, it is clearly the most prestigious position, as it puts him in overall charge of both the Iraq and Afghan Wars. Gen. Petraeus gave up this position to take over direct command of the Afghan War last week, after the ouster of Gen. Stanley McChrystal.