According to Time Magazine, General Stanley McChrystal has offered to tender his resignation to President Obama ahead of what is likely to be an extremely tense meeting at the White House on Thursday. 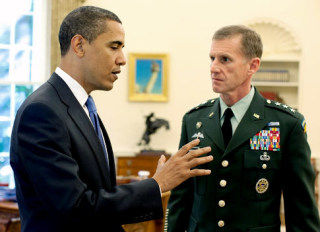 White House spokesman Robert Gibbs warned earlier today that “all options are on the table” with respect to Gen. McChrystal and that he might well be fired following the meeting. President Obama is said to be withholding his final decision until he meets with McChrystal.

Gen. McChrystal was summoned earlier today after Rolling Stone magazine published an article in which he and his staff openly derided President Obama and several other high ranking administration members.

McChrystal’s latest scandal comes at a potentially convenient time for the president, who is facing growing questions about the disastrous McChrystal Plan. While the administration has tried to spin the Afghan War as going quite well, the reality is obviously different. The scandal gives the president the option to fire McChrystal and change course without admitting that the strategy has been a failure.