House of Representatives Speaker Nancy Pelosi (D – CA) today said that while she hopes to deliver on the Obama Administration’s call for new emergency war funding by July 4, she wouldn’t promise it. 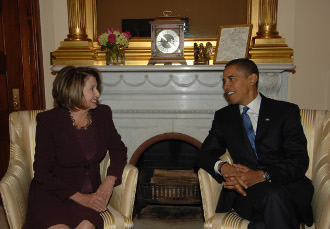 Pelosi insisted she doesn’t “want to give any dates, because then you’ll say I didn’t make the date.” The bill, which would provide an additional $33 billion in funding for the Afghan War, is currently stalled in the House, with Rep. David Obey (D – WI), the Appropriations Committee chair, refusing to call for a vote.

There is said to be considerable opposition in Congress, both from Republicans and Democrats, about the continued funding of the seemingly endless war, particularly given the current budget crisis and questions about strategy.

Secretary of Defense Robert Gates gave Congress an ultimatum of July 4 to pass the funding bill, warning that the Pentagon would begin to “do stupid things” if they didn’t get their way on the bill. It seems the speaker has her work cut out for her in delivering the funding by the deadline.