Turkish officials have been suggesting that they would dispatch a military escort with future aid flotillas to the Gaza Strip in response to the massacre of aid workers on board one of their ships by Israeli commandos earlier this week. The scope of the operation was never disclosed. 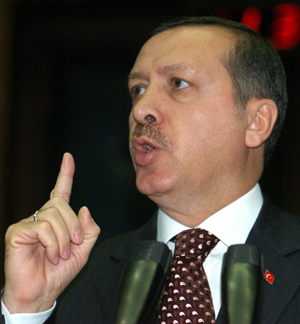 But now it looks like this may come to fruition in the near term and in very high profile fashion, as security sources within Turkey are reporting that Prime Minister Recep Tayyip Erdogan is not only planning to dispatch the Navy on the next flotilla, but that he is considering accompanying them personally.

Israeli officials dismissed the possibility of Erdogan visiting the Gaza Strip with the flotilla, describing it as unrealistic. The United States has reportedly asked Erdogan to delay the aid operation in light of rising tensions with Israel.

As Turkey’s population has expressed outrage over the massacre of Turkish citizens and the government has expressed its displeasure at Israel’s attack, Israel has done a comparatively successful job in spinning Turkey as the real villain domestically, and Israeli protesters have been out in force condemning Erdogan and Turkey in general as terrorists for both dispatching aid to the besieged strip and for complaining when the aid workers were killed.

Israel’s formidable military has roughly the same budget as Turkey’s, but as a member in good standing of NATO Turkey could also call upon much of the international community if its Navy is attacked on such a mission, making it unlikely Israel will choose to solve an accompanied aid delivery militarily.

179 thoughts on “Report: Turkish PM May Sail to Gaza Himself”