Secretary of State Hillary Clinton has conceded that there is a “very serious” split with Brazil over the third party enrichment deal on Iran, saying it is her belief that Iran will only negotiate once the sanctions are in place. 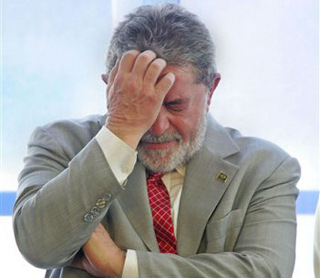 The hypocrisy of the US position, and the absurdity of Clinton’s claims considering Brazil and Turkey just finished negotiating successfully with Iran is not lost on either nation, and both have taken the US and other members of the P5+1 to task for their sudden opposition to diplomacy.

“Who are they to tlak against the idea of having nuclear weapons,” Turkish PM Recep Tayyip Erdogan asked. The five permanent members of the UN Security Council all have significant nuclear weapons arsenals.

Tensions with Brazil have been even chippier, as Secretary Clinton accused Brazil of “making the world more dangeorus” by trying to come to a deal with Iran, a claim which Brazilian President Lula responded angrily to, saying the arsenals of the US and others were the real danger.

The deal negotiated by Brazil and Turkey was materially identical to the one the Obama Administration had been demanding Iran sign since October. Now that Iran has signed it, the US has expressed vigorous opposition to the deal.

In fact, not only is the US now fighting the deal, they seem to be angrily fighting Turkey and Brazil, two nations whose only crime is trying to convince Iran to agree to the deal the Obama Administration claimed to have wanted all along.

24 thoughts on “Turkey, Brazil Lash US Over Iran Hypocrisy”