In a rare case of any sort of direct meeting with Iranian officials, the US dispatched Deputy Ambassador Alejandro Wolff to a dinner tonight being hosted by Iranian Foreign Minister Manouchehr Mottaki. 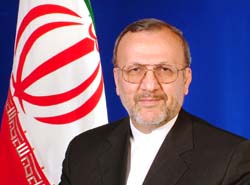 The dinner was attended by delegates from every single nation in the UN Security Council, including 12 ambassadors to the United Nations. Three nations, the US, France and Britain, sent lower level diplomats instead.

The exact purpose of the New York meeting is unclear, but it seems a meaningful opportunity for all sides to get together and discuss the nuclear issue, if there is any impulse to talk about that anymore.

For Iran, which hosted individual direct talks with 14 members of the Security Council over the past weeks (all except the US) in an effort to shore up opposition to the US-backed sanctions. The US attendance is significant, but the use of a low level diplomat probably signals it as little more than show, and leaves it unclear if anything significant will come of it.