Pentagon spokesman Geoff Morrell quickly repudiated comments from one of the Defense Department’s undersecretaries today, insisting that attack Iran at any time is “always an option.” 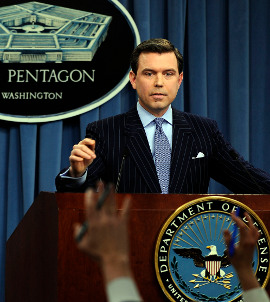 The latest comments came in response to Undersecretary Flournoy’s claims earlier this morning that a military attack against Iran was “off the table in the near term” and that the Obama Administration was focusing on “engagement and pressure.”

The US has been threatening to attack Iran for years, but those threats have gotten increasingly direct since President Obama took office last year.

Meanwhile Iran’s Supreme Leader Ayatollah Khamenei reiterated his nation’s outrage at the Obama Administration’s threat to launch a nuclear first strike against Iran. Earlier this month, President Obama announced that the US would never launch a nuclear first strike against a non-nuclear power, but then quickly noted that Iran was explicitly excluded from this pledge.