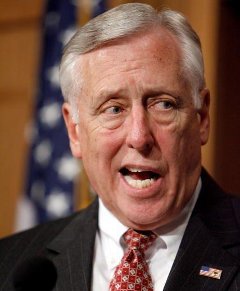 This time the pledge came in the form of comments by House Majority Leader Steny Hoyer (D – MD) who promised that the United States would act “sooner, rather than later” in more harsh sanctions against Iran for its civilian nuclear program.

The comments came as Israeli Prime Minister Benjamin Netanyahu once again demanded that the US enact “crippling sanctions” against Iran, blocking the nation’s gasoline imports in the hopes of crushing the government. Netanyahu made similar demands earlier in the month, and several times last month, and also innumerable times since coming into office last year.

But once again, the prospect of the sanctions, despite US optimism, seems slim. Russia has repeatedly opposed “crippling” sanctions, and said it would only support very limited sanctions targeting just the nuclear industry. China for its part again declared today that it remains firmly in favor of diplomacy, and says negotiations, not sanctions, remain the best way to solve disagreements.

6 thoughts on “US Vows New Sanctions Against Iran in ‘Weeks’”