Speaking today at the French defense university in Paris, US commander in Afghanistan General Stanley McChrystal today warned that the military was wasting money in using so many private contractors in the war in Afghanistan. 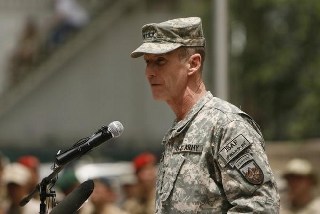 “We have created in ourselves a dependency on contractors that is greater than it ought to be,” warned Gen. McChrystal. The Department of Defense currently employs more private military contractors than soldiers in Afghanistan.

But exactly how many more isn’t entirely clear. The most recent figures from Centcom showed 107,292 contractors, but this was in February when only 78,000 troops were in the nation.

Since then the Obama Administration has gone through another massive escalation, adding tens of thousands of additional troops and likely at least as many additional private contractors came along with them.

The use of large numbers of contractors allows the US to severely underreport the number of “troops” it sends to a nation by classifying many of them as private mercenaries. It likewise makes the death tolls artificially low, as the large numbers of slain contractors (at least 100 in the past six months) don’t show up on official death tolls in the war.

7 thoughts on “Gen. McChrystal: US Wasting Money on ‘Too Many Contractors’”