The Iranian Foreign Ministry announced today that it intends to file a formal complaint with the United Nations following last week’s Obama Administration revelation of a new nuclear policy. 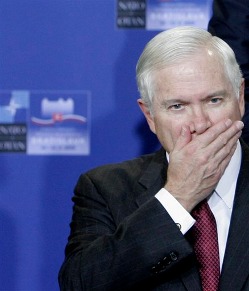 The new policy, praised by some nations as a step toward disarmament, included an explicit declaration from the administration that any pledge not to preemptively nuke non-nuclear powers did not apply to Iran, and that “all options are on the table” with respect to a future nuclear first strike against them.

Secretary of Defense Robert Gates reiterated the threat again today in a televised interview, accusing Iran of not being “in compliance with the Nuclear Non-Proliferation Treaty” and then declared that “for them, all bets are off.”

The threat is just one of many US threats to attack Iran over the past several years, but one of the few that has included an explicit threat to attack the nation with nuclear weapons, even though Gates admitted that Iran did not have any nuclear weapons of its own.