Two more Russian police were killed today in a suicide attack in the troubled Ingushetia Province, the latest in a string of attacks by the Islamic separatists in the North Caucasus that some are referring to as another civil war. 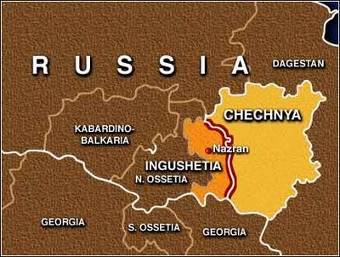 And while characterizing it as a war may be a stretch at this point it seems clear that the rebels are determined to start yet another insurgency, and self-described Chechen “emir” Doku Umarov seems determined to escalate the situation to levels Russian officials thought they had seen the last of from the region.

In addition to today’s Ingush bombing, last week saw a bombing in neighboring Dagestan which killed 12, and a major bombing of a Moscow subway by Chechen rebels which killed at least 39 people.

The reaction to these sudden upswing in violence has been a mixture of fear and frustration, as there is a growing sense that the Russian government can do little about such attacks, and is only offering the same conventional counter-insurgency strategy it has been trying for over 15 years.

The ability of the female suicide bombers to “blend in” and hit the subways has led to increasing fear that such attacks will become common in the future. This is a problem for Muscovite commuters but even moreso for those from the North Caucasus, who are increasingly finding themselves the subject of scrutiny and mistrust.

One thought on “Frustration, Fear as Russian Violence Continues to Flare”