The Obama Administration has made much about the alleged successes in their escalation into Afghanistan’s Helmand Province, but according to Major General Richard Mills, the Marine general poised to take over the top spot among Afghan Marines, those moves could just spark more violence. 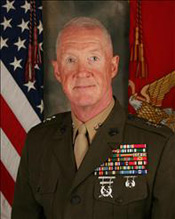 “I think the Taliban commander is back on his heels,” noted Gen. Mills, adding that as the Taliban looks to regain momentum after the Marjah invasion they will increasingly resort of suicide and roadside bombings.

The US sent 15,000 troops into the sparsely populated Marjah region in February, seizing control over the region and installing a Karzai appointee as the new governor of the region.

The US has dispatched large numbers of Marines into the Helmand Province as part of their escalation, which borders Pakistan. Maj. Gen. Mills will replace Brig. Gen. Nicholson as the top commander of the 19,000 Marines in the region.

One thought on “Marine General Predicts More Killing in Helmand”